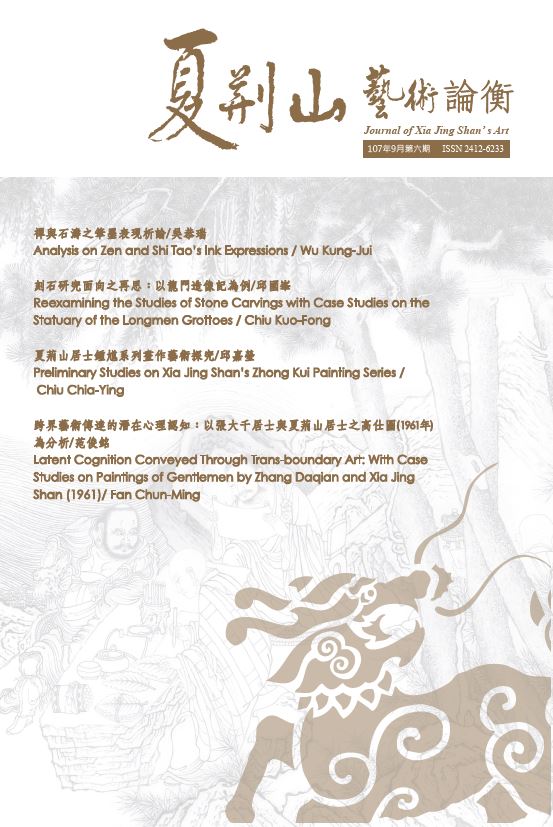 The art of traditional Chinese calligraphy and painting strives to achieve optimal expression with the use of the brush and the ink and to convey the state of mind, which is done by artists in order to communicate the core philosophy embodied in their art. This concept could be traced back to the following philosophy advocated by painter Chang Tsao in the Tang dynasty: “Outwardly, follow the creativity of Nature; inwardly, gain from the source of one’s heart.” The practice follows the law of nature in form but with one’s inner sentiments integrated, thereby creating a new world. This philosophy is echoed by Xia Jing Shan’s inter-perceptual creative journey of self-training, self-learning, self-enlightenment, and self-verification, demonstrating through his art an aestheticism of immense compassion and sophistication. “Exploring Chinese Ink Painting and Calligraphy” is the overarching theme examined in this issue, with the following four papers, containing analyses on Chinese calligraphy and paintings and interpretations on Xia Jing Shan’s artworks, selected based on a dissertation evaluation process and decisions made by the editorial board: （1） “Analysis on Zen and Shi Tao’s Ink Expressions” by Wu Kung-Jui （Part-time Assistant Professor, Department of Calligraphy and Painting Arts, National Taiwan University of Arts）: In addition to examining the influence that the teachings of Zen had on Shi Tao’s art and theoretical system, the paper proposes further studies on Shi Tao’s interpretation on the principles of “one-stroke” and the wrinkling techniques applied in his landscape ink paintings. （2） “Reexamining the Studies of Stone Carvings with Case Studies on the Statuary of the Longmen Grottoes ”by Chiu Kuo-Fong （Department of Fine Arts, National Taiwan Normal University, PhD candidate）: Further examinations and studies are conducted on Northern Song dynasty’s religious stone carvings, with unique case studies, such as “the Recordation of Statue of Ci Xiang”, reexamined, in order to gain further understanding on these religious stone carvings’ production backgrounds and possible cultural implications.   （3） “Preliminary Studies on Xia Jing Shan’s Zhong Kui Painting Series ”by Chiu Chia-Ying （Department of Chinese, National Kaohsiung Normal University, PhD candidate）: This paper focuses on seven paintings from Xia Jing Shan’s Zhong Kui series, seeking to organize and categorize the series through examining the connection between Zhong Kui’s cultural significance and Xia’s creative outlook, and the notable features observed in the artworks from the series and the meliorism philosophy conveyed. （4） “Latent Cognition Conveyed Through Trans-boundary Art: With Case Studies on Paintings of Gentlemen by Zhang Daqian and Xia Jing Shan （1961） ”by Fan Chun-Ming （Graduate Institute of Religious Studies, National Chengchi University, PhD candidate）: This paper compares renditions of “painting of gentlemen” created in 1961 by Zhang Daqian and Xia Jing Shan, seeking to explore the theory of expressions that unify latent cognition and art by examining the two master Chinese artists’ integrations of their own personal realizations on life into their art, and the resulting distinctive creative outcomes.

Editorial Board of Journal of Xia Jing Shang＇s Art